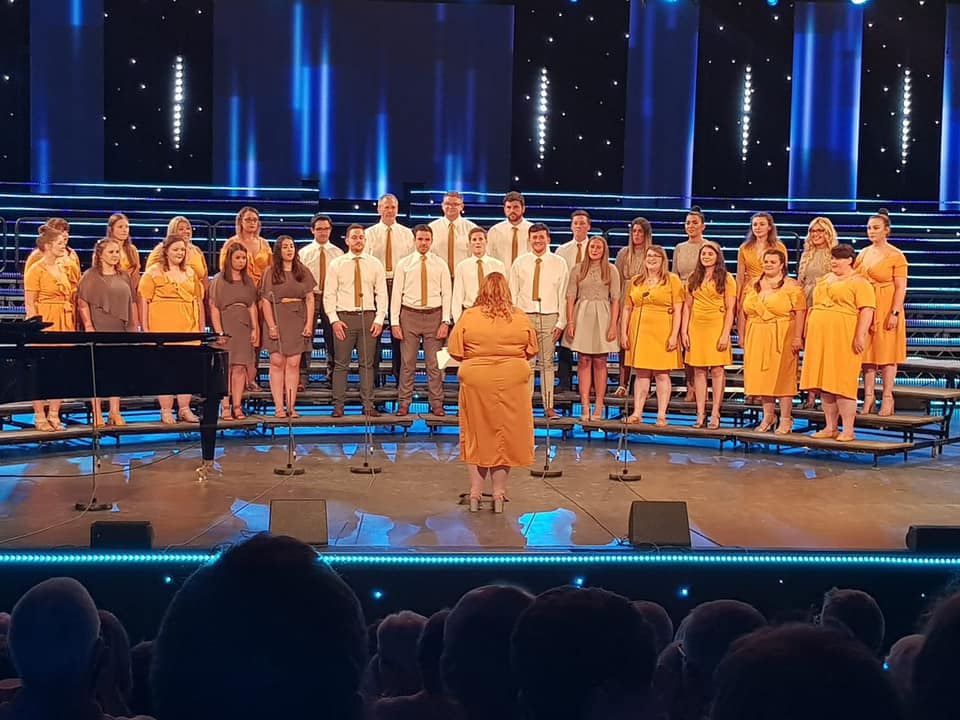 Pen y Cymoedd awarded a Micro Fund grant as a contribution towards accommodation, travel and outfits for the choir to compete at The National Eisteddfod of Wales and purchase of a keyboard and amp.

We were so proud to see them on TV competing and we wish them continued success.

The Aelwyd was established in January 2018. Aelwyd doesn’t have a direct English translation. It’s one of those Welsh words that has many different meanings. In short, it’s about community, friendship, belonging and location. The tradition of an Aelwyd has been around for centuries and usually culminates in the Welsh speaking community coming together, in a safe space to sing and recite poetry and compete against other ‘Aelwyd’s’ in Urdd and National Eisteddfodau. However, there had not been an Aelwyd in the Rhondda for over half a century, so this exciting undertaking hopes to align itself with a number of key aims and objectives of the Welsh Government and their Cymraeg 2050 strategy – 1 million Welsh speakers using the Welsh language

The aim of Aelwyd Cwm Rhondda is to raise the profile of the Welsh language across the Rhondda; empowering and inspiring all generations, whilst raising the confidence and aspirations of our own membership.

One crucial element of achieving their aim is competing at The National Eisteddfod of Wales. The festival offers a unique opportunity to immerse themselves in a Welsh-speaking environment and compete against other Aelwyds. No other festival draws such volumes of Welsh speakers to one place.

“The Aelwyd to me is a safe harbour. It is an escape from the same old day to day of life. It’s a place where acquaintances become friends and a family is forged!! Aelwyd Cwm Rhondda is a community, comedy club, drama club on times but above all else a family! Who bask in the good times and support through the bad! Diolch Aelwyd Cwm Rhondda, wnes chi achub fy mywyd i!”

“I come from North Wales originally, so I didn’t really know many people down here before I joined the choir. It’s been great to find a group of young people that I can sing and socialise with. I was a little nervous before joining as I haven’t sung with a choir for years, but I quickly settled in and felt at ease. I’ve got to know so many new people and had some fantastic experiences singing with the choir at different gigs, concerts and, of course, the National Eisteddfod”

“Not only has the Aelwyd given me a space to speak Welsh, it raised my confidence and health and wellbeing. It’s been an incredible experience competing and visiting the National Eisteddfod for the first time and its truly inspired me to do more in Welsh. The Aelwyd have been a family to me over recent months and have given me purpose, during a difficult time.”

How this application met fund priorities: