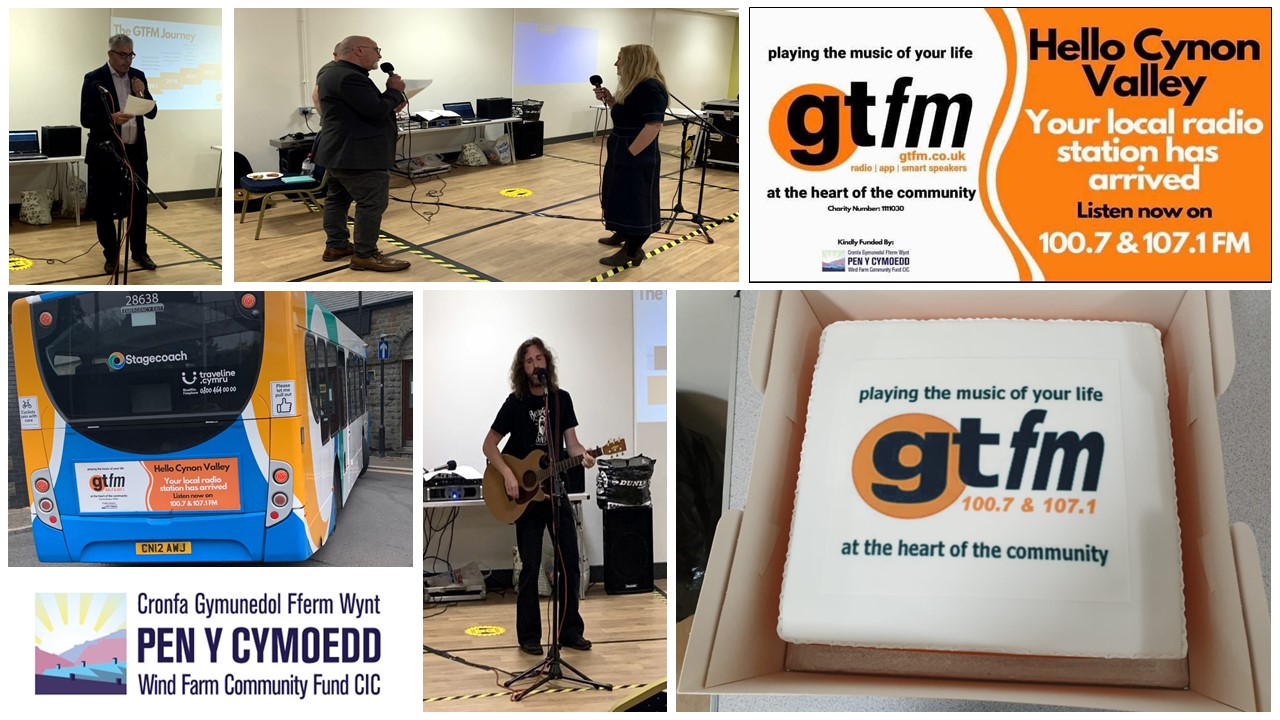 Back in 2020 GTFM approached the fund as they had ambitious plans to extend their already popular radio station into the Cynon valley. Originally formed in 1999, GTFM provides a voluntary local radio service. It was awarded the first Community Radio licence in Wales in 2005 and had an audience of more than 20,000 regular listeners mainly centred in the Pontypridd area.

To extend the coverage of their charitable radio service across RCT, they needed funding to build two FM radio transmitters to establish local radio in the Cynon area, allowing them to launch a service for local residents which would:
–           Provide news bulletins reporting local, RCT and Welsh interest stories in addition to world and UK headlines.
–           Give an opportunity to local charitable and not-for-profit community organisations to gain free publicity.
–           Offer local businesses a new and affordable advertising medium.
–           Promote volunteering in the community and offer opportunities to local residents.
–           Actively promote the learning and use of the Welsh language in the Aberdare area.

The fund offered them £12,491 and they installed two new transmitters in the Cynon valley with support of a local club and RCT CBC. Both transmitters funded through this grant were successfully launched on-air on 11th June 2021. The construction phase went smoothly and although test transmissions revealed some interference issues, these were all resolved in conjunction with OFCOM. Nearly all of the surrounding Cynon Valley area is now served with a strong signal, in all extending GTFM’s coverage to around 65,000 more people than could hear it clearly on FM before. GTFM reception is also now possible on the main A465 road as well as in parts of Merthyr.

•          Since the Cynon launch, they have been receiving an increasing number of news stories from the local MP Beth Winter, MS Vikki Howells, RCT Council, the local Health Board, the Police and other public service organisations.
•          Local trainee news reporter Brad Williams has been awarded a Diana Award in recognition of his Cynon Valley community news reporting, both in his own right and later as a member of the GTFM news team. Following a successful year at Cardiff University’s post graduate Journalism course, Brad was hired by ITV Wales in June 2022.
•          They have hourly free ‘Community Message’ and ‘Events Guide’ (Whats on) announcement services and worked with Interlink RCT to make contact with Cynon Valley organisations. While some already knew about GTFM and were sending information for broadcast, many didn’t and were delighted to learn GTFM were in the Cynon. One early example in 2021 featured an interview with Lorraine Olson who runs a local ‘swap shop’ style community organisation in the Cynon Valley called “Cynon Care & Share“.
•          PyC were interviewed on air about Director recruitment, they have promoted the SplashPad and other local projects, and also interviewed William Tregaskes the Manager of the Cynon Valley Museum in Aberdare about various cultural events there.
•          GTFM intends to gradually enhance the depth of its Welsh language output to the point it can play an active part in promoting the National Eisteddfod when it comes to RCT and will help organise promotional events to raise awareness of the Welsh language as well as plan activities for the actual RCT Eisteddfod week, when GTFM hopes to be able to offer an additional ‘pop up’ Eisteddfod station on its digital system

There were unexpected technical complications that had cost implications and the Covid pandemic has so-far limited the amount of promotional activity they could have done so they are still intending to undertake more Aberdare area marketing and recently started by having a presence at the Aberdare Festival. But none of these issues have been allowed to prevent the successful delivery of the project’s main short-term objectives.

“We believe the project has already strengthened GTFM’s financial sustainability, evident through increasing post pandemic advertising bookings – both from clients in the new Aberdare/Cynon Valley broadcast area and because some advertising agencies and larger scale advertisers (including specific RCT Council departments) now perceive GTFM’s expanded coverage area as worthy of more attention because it now includes both of the county borough’s main towns (Aberdare and Pontypridd). Meanwhile in terms of the community services we offer we’re already being contacted by Aberdare area organisations seeking publicity for their activities. A recent example is Llwydcoed Brass Band which made contact in April 2022 to ask if we could mention their 110th anniversary concert in June.  As well as mentioning it on our ‘whats on’ listings, we also conducted an on-air interview with the bands secretary, who told us about the bands history and current activities as well as the anniversary concert, which we also posted as a podcast. We will continue to consolidate GTFM’s position as the primary local radio service for RCT County Borough, encouraging community participation especially from newly covered areas like Aberdare and the Cynon Valley.
Sincere thanks for all your help to date.
Terry Mann, Station Manager, GTFM (South Wales) Ltd.”