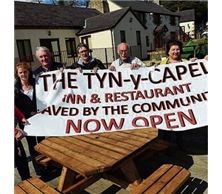 The Minera Community received National Lottery funding to run the restaurant within their newly acquired community pub. As a stand-alone business within the larger project the restaurant provides jobs for local people. The pub is run as a not-for-profit venture.

The local village pub in Minera closed in 2011 but thanks to the efforts of the villagers of Minera in North Wales the historic pub reopened in 2013. The venture now runs a successful pub and restaurant holding many local community events and continues to develop the space’s potential as a function venue.

Eifion Williams, a member of Minera Community Ltd, said: “This initiative set out to do two things. Firstly we wanted to open the pub and we’ve done that with the help of the Community Shares Fund. Secondly we wanted to reignite community activity and that’s exactly what’s happened.”

How did they do it?

Over 90, mostly local, shareholders raised more than £37,000 to save the Tyn and run it as a community pub. The Tyn also received a range of other financial support including a £48,000 grant from the National Lottery. The Tyn is staffed mostly by volunteers and run as a not for profit venture.

They operate a democratic structure with each shareholder having one vote at our meetings regardless of how many shares they hold.

The pub and restaurant has been so successful that within a year of reopening it received a runner-up award in the CAMRA pub of the year competition 2014.